HUMAN ZOOS     /     ZOOLOGICOS HUMANOS “At a time when slavery gives place to imperialism, the world is divided between those who are exhibited and those who spectate. Regardless of how objective or not they are these … 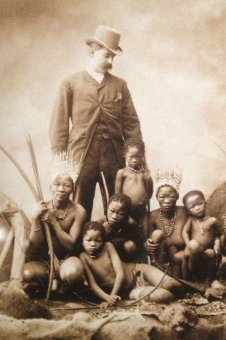 “At a time when slavery gives place to imperialism, the world is divided between those who are exhibited and those who spectate. Regardless of how objective or not they are these exhibitions present so-called exotic populations as inferior to Europeans, Americans and Japanese and thus the fitting subjects of colonial dominion.” 1

“The exhibitions of “Savages” base themselves on anthropological studies, which during the 19th century, undergo a major development. The epoch seeks to understand, to classify and to order the world within a hierarchal structure using the science of Man as its tool. Racial hierarchies become the norm and living exhibits are compelled to fit into this codified model through which a particular vision of the world is constructed.

These “living specimens” present an unparalleled opportunity for theorists and intellectuals to carry out anthropological experiments, take photographs and create wax casts. Characteristics such as eye colour, skin, hair structure and cranial dimensions are observed and the results obtained used to record and classify the so-called “races”.

It is within this context of western expansionism and scientific research that sideshows find their raison d’être. The spectacles provide the tools with which to comprehend the “savage” and class it within an objective, ordered and rational hierarchy, going from the deviant, through to the mad, the insane and finally the representatives of apparently inferior races. At the same time, the Savage is associated with the subjective popular imagery of the “Other” and “Elsewhere”, thus forming a coherent system that embodies both intellectual discourse and popular stereotypes.” 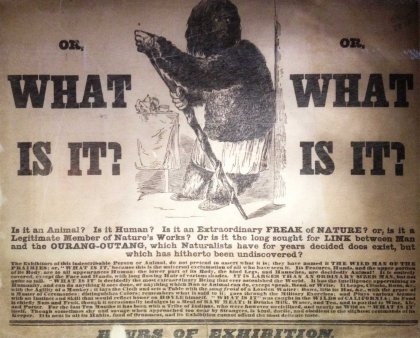 “…As for the “monsters” exhibited – “dwarfs”, “giants”, “bearded women” and other “human miracles” – be they from Europe or some distant country, their portaits hang on the walls of such European Palaces as the Château de’Ambras, home to Archduke Ferdinand II of Habsburg. Exactly who the “other” is makes no difference, the effect remains the same: a feeling of curiosity before such strange individuals, so different and so exotic. The exhibition is not yet a genre. We are but at the very start of this phenomenon.”